Praying with the Kids: Morgan Zhou

Prayer is a divine relationship that involves the whole family, Morgan Zhou has discovered.
February 17, 2020 by Leslie Koh It seemed like a good time to pray. Ten-year-old Elijah was very upset with a friend, and Morgan and his wife Angela thought it would be a good time to teach him about love and forgiveness.

But their son was in no mood to listen.

“I want to murder him,” raged Elijah. Praying was clearly the last thing on the angry boy’s mind.

It was then that Morgan, a teaching fellow at the National Institute of Education, realised where they were going wrong.

“We try to help them sense what is God’s heart, what is God impressing on their hearts,”…

“In our minds, it was a good thing to ask him to love his enemies. We really wanted him to pray. But maybe we were looking more for the form. We just wanted to tell him, ‘Why are you saying this? You should love him, you should pray for him.’ But what he really needed was someone to talk him through his emotions. We realised that the emotional aspects needed to be settled first.”

So Morgan stopped trying to get  Elijah to pray, and started asking his son, “Why are you so upset? What did your friend do to you? What might he have been thinking?”

As he slowly talked his son through his quarrel and helped him to consider a different perspective, Elijah began to calm down, and soon, he was more ready to pray.

The incident reminded Morgan that teaching his sons Elijah and Elias to pray, and praying as a family, isn’t just about talking to God—it’s also about building a godly character, living and loving according to God’s ways, and nurturing the relationship within the family.

But first, Morgan tries to make prayer a habit for the family. He and Angela pray, on their own, for their children every morning. The Zhous also pray together as a family twice every day, with Morgan working it into their routine.

Instead of trying to pray in the early-morning rush at home, he gets his kids to pray while they are in the car. At night, they might pray at their daily devotional, or when they are being tucked into bed.

Morgan has also tried to bring some structure into their prayers, going beyond simply asking God for things to “growing” the prayers according to his sons’ maturity.

“We started by reading Bible stories with suggested prayers to them, and later, let them read on their own,” he says.

“Then, we started to read Christian devotionals and the Bible together, and said simple prayers based on them. Later, when they could do children’s Bible study, we would go through the Bible study materials.”

Morgan and Angela also get their sons to talk about and reflect on what’s been happening in their lives, in school, and in the family.

“At early stages, we would just go through the materials,” he says. “Over time, when they were more able to think at a deeper level, their prayers became more expansive.”

There  are times when Elijah and Elias don’t want to pray, such as when they’re tired after a long day out.

To stress the importance of consistent prayer, Morgan says he will usually not let the boys end the day without praying. However, he will allow them to say a set prayer, such as, “Thank You, Jesus, for today”, and to pray for their grandparents’ salvation.

“We try to be authentic. We show them that not everything is perfect, that we too are struggling,”

To encourage the boys to persist in prayer, Morgan and Angela continually remind them that God answers their prayers. The Zhous have a “family thanksgiving book”, a journal in which they all regularly write down what they want to thank God for, including answered prayers.

It helps them see the truth of Romans 8:28: “And we know that in all things God works for the good of those who love him, who have been called according to his purpose.”

Says Morgan: “When we look back, we can see God’s hand at work. That encourages us to approach Him in thanksgiving.”

Morgan has also tried to make prayer fun. He gets his sons to take turns to start the family prayer on “odd” and “even” days, or in the car, he’ll make whoever takes the front seat pray first.

“But we all must pray,” he adds. “We don’t give them a choice, it’s just a matter of who starts first.”

To give their sons more to think and pray about, Morgan and Angela share about “adult” issues like the problems they face at work.

“We try to be authentic. We show them that not everything is perfect, that we too are struggling,” he says. “We share about our concerns and also our thankfulness for the blessings we have received.”

Morgan also tries to spend time probing a bit more into what his sons are thinking, so that he can pray for them more specifically.

“Our prayers then become richer,” he says. “We need to go beyond just asking, ‘How was school?’ and accepting their short answers, ‘Everything is fine’. We need to probe further.”

And he has tried to show his sons, through Psalms, that like David, they can bring their deepest feelings and troubles to God. “It helps them see that prayer is just a relationship,” he says.

Morgan has also tried to make prayer fun. He gets his sons to take turns to start the family prayer on “odd” and “even” days, or in the car, he’ll make whoever takes the front seat pray first.

Such conversations have helped the boys grow in their depth of prayer, for example, when praying for Angela’s parents. “I’ve seen them grow from simply praying for God to help Ah Kong and Ah Ma to praying specifically for them to come to know God,” he says.

Indeed, Morgan and Angela continually emphasise that prayer is a glimpse into God’s heart, and not a routine or a formula. “We try to help them sense what is God’s heart, what is God impressing on their hearts,” he says.

Inspired by Malachi 4: 6—“[The Lord] will turn the hearts of the parents to their children, and the hearts of the children to their parents”—they encourage the boys to pray for those whom God desires to turn to Himself, such as those who have yet to experience God’s love, and those who need His help.

So they will pray for a cousin not to get addicted to computer games, for friends in church to pray more, and for the needy.

And where possible, Morgan also tries to get his sons to translate their prayers into action, such as by telling their grandparents that “Jesus loves you”.

At the same time, Morgan has also learnt to relate prayer to his sons’ own hearts. 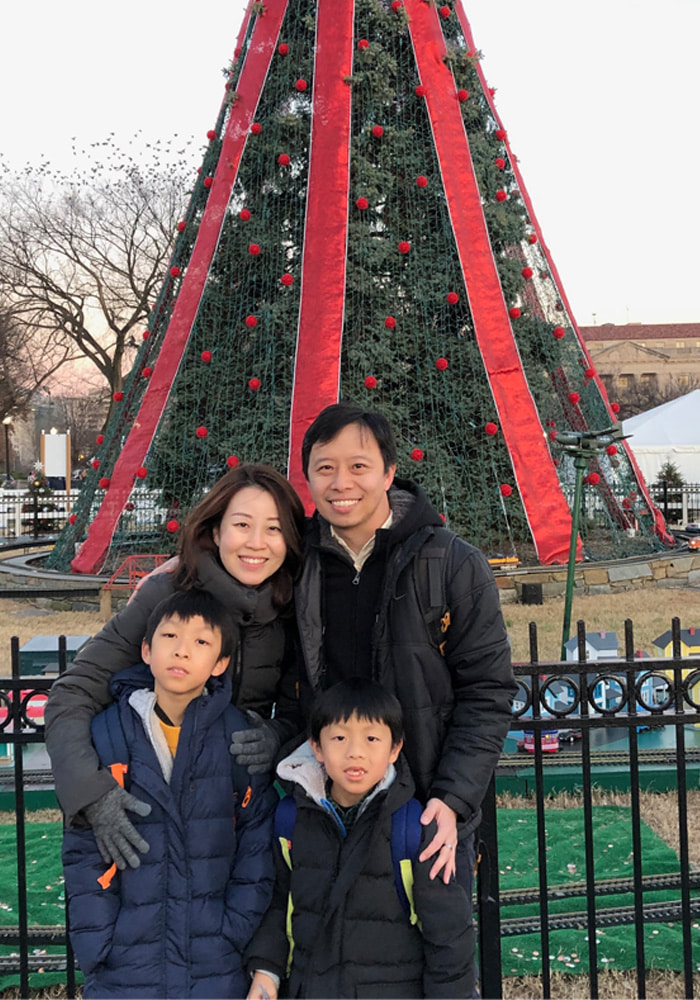 Having made the mistake of insisting that Elijah prayed for forgiveness while he was still angry, Morgan has learnt to first address his sons’ emotions, so that their following prayers become more meaningful.

He remembers one time when Elijah didn’t win a prize in an art competition after winning one the previous year.

Instead of just telling the disappointed boy, “It’s okay, try again next year”, Morgan and Angela sat down with their son and helped him to process his feelings.

“Why are you sad?” they asked him. “Is it because you thought people would expect more from you? Do you think we will love you any less because you didn’t win again?”

Talking Elijah through the issue, says Morgan, gave him and his wife a chance to affirm their son’s effort rather than the result.

It also made their following prayer with him more meaningful, as they could link the lessons he learnt with God’s ways. “It’s hard to pray for some things when our emotions are affected,” he observes. “But if you talk through them and look at God’s Word, when you come back to pray, it’s a lot easier.”

Having tried to manage many quarrels within the family, Morgan has come to see another aspect of prayer—as reconciliation between men and God. It is an insight that he tries to share with his sons whenever the opportunity arises.

“When we discipline them, we also try to show them that the things they have done wrong  don’t impact only the people they had hurt, but also God,” he says.

“When the siblings quarrel, we make them apologise. But that’s at the human level. When we sin, our fellowship with God is also broken. So we pray for forgiveness, to reconcile with God.”

For Elijah and Elias, this could be a simple prayer as “God, I’m sorry for hurting You”.

Morgan has also tried to bring some structure into their prayers, going beyond simply asking God for things to “growing” the prayers according to his sons’ maturity.

Says Morgan: “We want them to recognise the gravity of their actions, so that they really want to be in a right relationship with God. As parents, we can help them understand that they can connect with God to receive His forgiveness so freely.”

James 5:16, he notes, stresses the importance of reconciliation: “Therefore confess your sins to each other and pray for each other so that you may be healed. The prayer of a righteous person is powerful and effective.”

Prayer Is Looking to God

Prayer not only makes the family come together to start the process of resolution, but also helps Morgan and his family to keep their eyes on God.

“When we pray and do our devotion, it reminds us not to be so inward-looking,” he says.

“It’s hard to pray for some things when our emotions are affected. But if you talk through them and look at God’s Word, when you come back to pray, it’s a lot easier.”

“It brings up the idea of family and community, and the bigger picture comes to the forefront. Even if we are not in the right spirit or mood, when we come together and look at God’s Word, we will think about who we need to pray for, for example, a relative with cancer. Prayer makes us focus on God, on His Word, and on others. It takes us away from looking at ourselves and our own needs. Turning to God really helps us to bring our mind to focus on Christ.”

Prayer also reminds Morgan that he cannot rely on his own human wisdom, intellect, and knowhow in the journey of parenting, but on God’s grace and provision.

As Proverbs 3:5 stresses: “Trust in the Lord with all your heart and lean not on your own understanding.”

Says Morgan: “I’ve learnt to depend a lot more on God, and to see His sovereignty. Once we recognise that there are so many unknown variables we don’t have control over, it’s a logical thing to go to the Creator God to ask Him for guidance to be good stewards in bringing His children up in the fear and knowledge of the Lord. When we have so many things we can’t control, all the more we need to pray.”

Leslie Koh spent more than 15 years as a journalist in The Straits Times before moving to Our Daily Bread Ministries. He’s found moving from bad news to good news most rewarding, and still believes that nothing reaches out to people better than a good, compelling story. He likes eating (a lot), travelling, running, editing, and writing.
Share This Article
Tagged: interview Leslie Koh Morgan Zhou parenting prayer testimony Discipline Is Not Punishment: Tim Kimmel Make It Your Resolution To Connect With Your Child: Lim Chien Chong